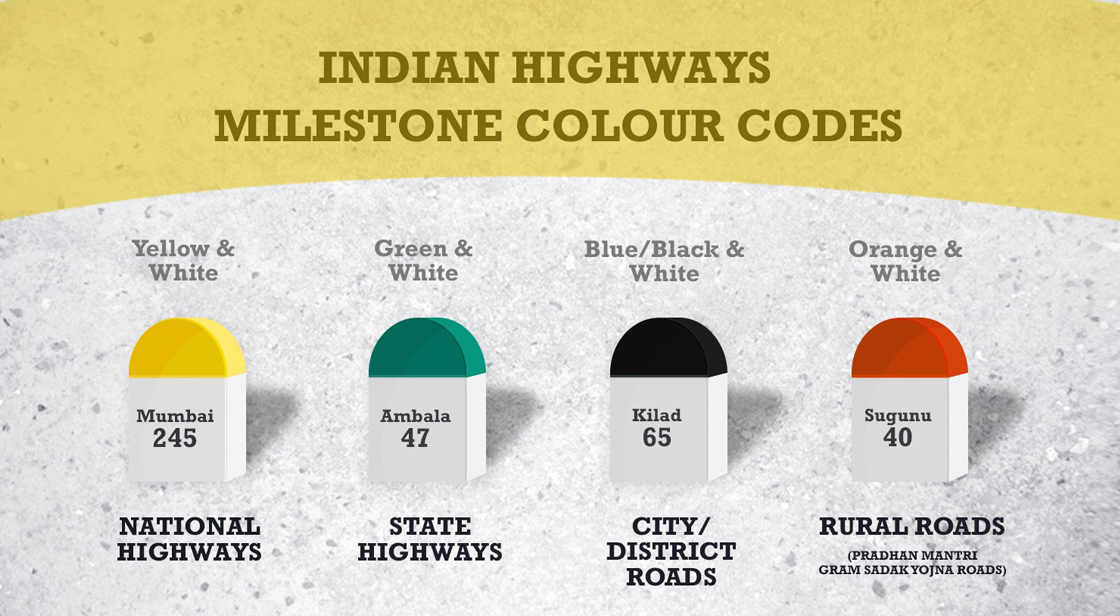 Road-trips are quintessential, lurking through never ending roads and awaiting for the next stop is what, on-lookers wait for. But as an observer, it’s more like a third party display of quotient to look at the miniscule of the detailing and never have an unusual question of, “what these colour association means in milestones?”.

Milestones on a general basis, they not only conveys or informs of how many distance we have travelled or remaining to be travelled but also indicates what road you are travelling to. In India, these milestones are pretty much divided into various section. If we dwell more, on managerial basis, there are 3 kind of roads - the one maintained by the Central Government bodies like NHAI, the respective state government and the district administration.

National highways are always yellow and white colour, the highway number is written on the head of the milestone. The sum of the distances of two nearest cities in each direction from the milestone is listed on the side.

State highways are always in dark cyan and white colour, the number of kilometre is mentioned on the stone, followed by the name.

City or district highway milestones are always black and white in colour, the number of kilometre is mentioned along with the name.

The names of the proximate towns and cities are written along with distance in kilometres. On circumspect highways, both sides of the milestones are used, depicting the distance to the nearest of the cities. The sum of the distances of two nearest cities in each direction from the milestone is listed on the side.