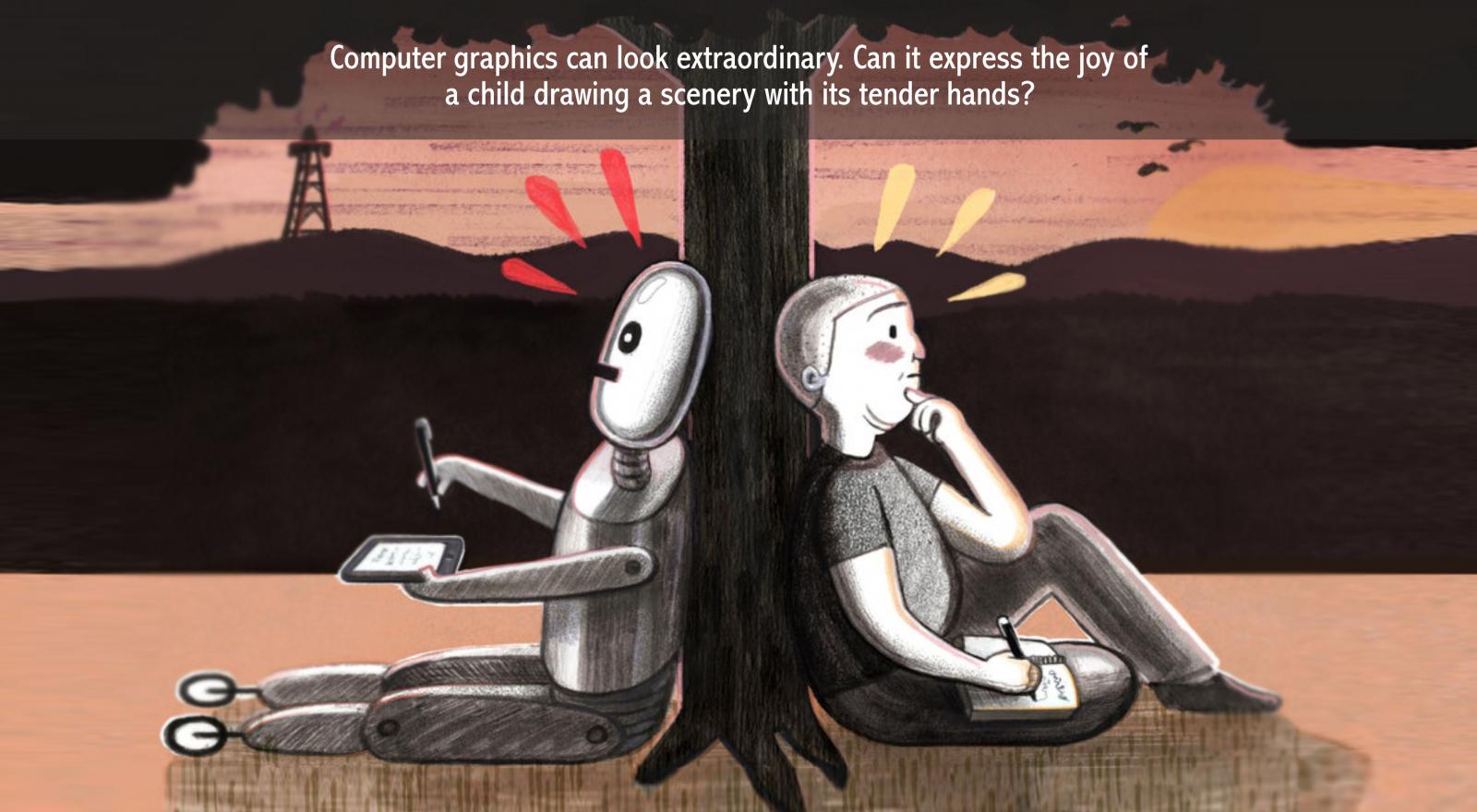 Computer graphics can look extraordinary. Can it express the joy of a child drawing a scenery with its tender hands?

Computers are part of our daily lives. It is almost our alter ego. But can computers imitate real life art with the same passion as that of a human? Can it draw like a child and with the same emotional attachment? Art without passion or emotion is a disembowelled art even if it wins accolades as the best creative art ever seen. Computers can be near-human in intelligence but infusing passion that arises out of human emotional involvement is still a far cry.

Unbelievably scientists are vigorously pursuing an emotional computer that could bond with humans. This could be a vainglorious attempt as machines with fantastic Artificial Intelligence (AI) can never equal the role of a person who is born with flesh and blood and think on his own.

Yes, scientific advancement is occurring at a mindboggling rate but a computer with human-like emotion is unthinkable. After all artificial Intelligence is artificial.

Though Deep Blue was extraordinarily brilliant it had no discriminatory sense to counter Kasparov other than reading the programmed moves. It lacked the passion which a human like Kasparov had. Indeed, humans are unique and can never be correlated with machines in real sense. However, on the scale of artificial intelligence v natural Intelligence Kasparov could not help admiring the computer for its cunningness and brilliance. He remarked after one of its brilliant counter move: “It was a wonderful and extremely human move.” Coming from Kasparov that must have cockled the hearts of those who created Deep Blue.

Computer designed art can be epitome of creativity on several parameters in this age of super computers. Computer-generated art may seem to have greater sophistication than artists who use their own imagination and creativity. The complexity of computer design can be fascinating and mindboggling. But everything in the end could be said to have originated in the human brain which programs the computer. All computers are man-made; artist has unique with unfathomable emotions and expresses the feeling for Nature which no computer can ever do. The art created lingers on in the subconscious long after the artist is dead and gone.

Though machines are rapidly evolving in unbelievable complexity and may reach near-human capabilities what they can never achieve is the common sense to solve problems that are not part of the programming. For instance, I type a spelling wrong and the computer would alert me giving suggestions. But does it understand what I am writing and what I mean by it? If I write “Humans eat hay” the computer has no idea that the sentence is practically wrong as no human eats hay because by itself it cannot think. Otherwise the computer would alert me saying “humans don’t eat hay. Correct your sentence.” It will never do that unless there is something wrong with the sentence that went against the grammar rules in the programming.

What makes humans understand art is more beautiful than any computer comprehends? Can a computer understand the aesthetics which is a subliminal concept? 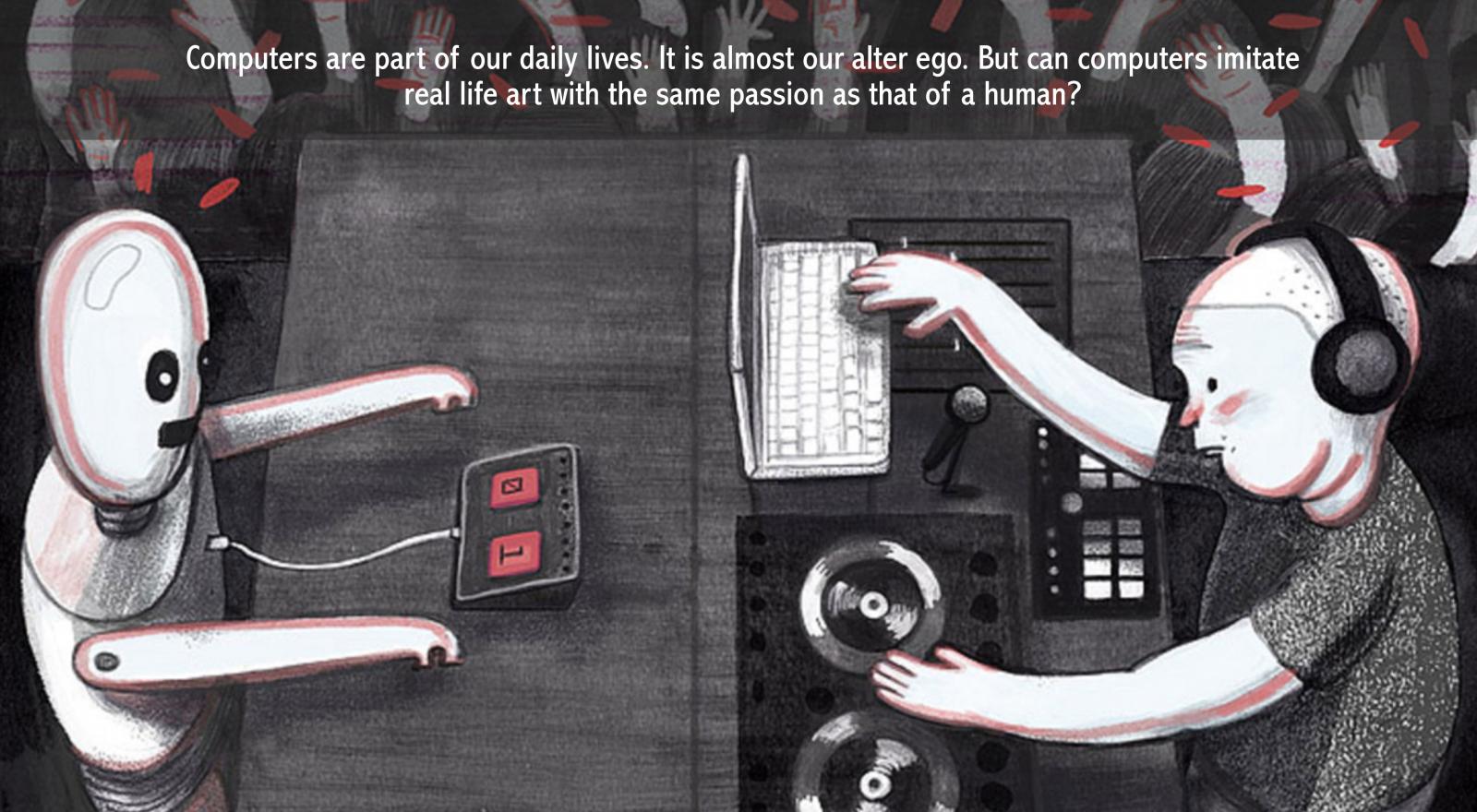 Beauty of art is more than mere use of colour, shape, brush strokes and size that impacts our senses. It is the human ingenuity and creativity which turns into art in the ultimate analysis.

Artists genuinely create art. For example, father of modern art Raja Ravi Verma created drawings and paintings that are soul-stirring. He was an Indian painter of the 18th century who attained fame and recognition for portraying scenes from the epics of the Mahabharata and Ramayana.

He was born in Travancore and died in 1906. He was so talented that at the age of 7 he unveiled his painting skills on the walls of the Kalamanov palace with the help of charcoal. His paintings Princess Damayanti talking with Royal Swan; and other paintings depicting Hindu deities and episodes from the epics and Puranas still bring profound joy in the viewers. In 1873, he won an award for excellence at the Vienna Art Exhibition.

No computer could have done what Ravi Verma did as art is intrinsically subliminal that evolves over time with passion and made possible as humans are God’s creation. But computers programmed can only imitate without a tinge of feeling or emotion.

Conversely those who argue about computer supremacy can never deny that it is the unlimited creative power of the human mind that created computers in the first place. Humans are emotionally surcharged with happiness and sorrow. Death disturbs while factors that bring joy make humans grow stronger and powerful.

Scientists of the National Research Nuclear University in Moscow are trying to create an emotional computer called 'Virtual Actor.' This machine may have the ability to study as a thinking person without programming. It can set its own learning goals, formulate questions to achieve these goals and actively seek the answers. Wow!

Well, the fact remains machines not being of biological origin like humans can never think and act independently and remains to be seen how biological solutions can be imitated through artificial solutions.